Junk Doctors Junk Removal and Hauling was founded in Cary, NC by Lee Godbold. Godbold is a fifth-generation Cary native and the grandson of Bob Godbold, who served on the Cary Town Council for almost twenty years. Bob Godbold has a park named after him located on Maynard Road near Sk8 Cary. You could say Godboldâ€™s roots run deep in Cary. Junk Removal in Cary, NC was just the start to Junk Doctors.

Those who knew Bob would be quick to point out that he didnâ€™t put up with any junk. His grandson definitely inherited that personality trait but also took it just a step further. He not only doesnâ€™t put up with junk from people, but he also helps them get rid of the junk they have! Junk Doctors has been Caryâ€™s premiere choice for junk removal for years now.

Godbold gets a kick out of seeing street names as he drives through Cary now. â€œThere arenâ€™t many streets in Cary that we havenâ€™t done a junk removal job on. It just amazes me how many people use our company. I remember when I first started Iâ€™d be in a large group of people in Cary and would get asked what I do or what school I went to. Iâ€™d tell them that I owned a business called Junk Doctors. â€œWhat is Junk Doctors?â€ theyâ€™d ask. Iâ€™d explain that we are a full service junk removal company in business to haul away all of Caryâ€™s junk! Now, when Iâ€™m in a group and tell people that I own Junk Doctors, most people know who we are or have seen our trucks around. Pretty cool!â€

Driving through Cary thinking back on the neat jobs Junk Doctors has done with Junk Removal in Cary, NC

Godbold thinks back fondly on some of the neater things his junk removal company has done in Cary. â€œBecause of my roots, I come across people who knew or knew of my grandfather. Itâ€™s really neat to encounter those people, many of whom have roots in Cary just as deep as mine.â€ Godbold talks of doing a job for the son of the man who used to own Peteâ€™s Hardware in Cary. â€œPeteâ€™s has been closed since I was a kid. But I still remember all the old-timers talking about Pete Murdoch and his hardware store. When his son called up, I knew exactly who they were talking about.â€ Pete had passed away and Junk Doctors was hired to haul away the junk left from his estate. â€œEstate cleanouts in Cary can be interesting jobs.

Iâ€™ve never been one to get too crazy about the junk we come across. But estate clean outs can have some really great and historical stuff. Can be very neat for sure.â€ Pete did have a bunch of stuff left over from the old hardware store. He had some old merchandise, credit records, an old cash register, signage, and more. â€œIt was a neat junk removal job in Cary, thatâ€™s for sure,â€ Godbold said. For Junk Removal in Cary, NC contact Junk Doctors today!

Some of the other, neater trash hauling jobs Godbold has gotten in Cary include clearing out a home in Macgregor Downs. Several truckloads of junk were hauled out of this large Macgregor home and the attached carriage house. Inside the garage were two old cars from the nineteen-teens. One was a Peerless and the other a Pierce Arrow Limousine. A friend of Godboldâ€™s is an avid car collector and he purchased those cars. At the time of this writing, the Pierce Arrow is being restored and should be shown at the Amelia Island car show coming up in a few months. â€œIt was really cool to come across those old cars. You never know what kind of stuff you are gonna come across in a Cary junk removal job. Thatâ€™s for sure.â€

â€œCary has a lot of great history and it is definitely neat to be able to run a Cary junk removal company and come across some of that history. I remember doing a job once at a house on Dixon Street that had been built at the end of the Civil War. There was stuff in that basement that had probably been there since the 30â€™s. There was an old fridge that was still working in the house that was probably an original piece. It had the old exposed coils on top of the machine. We actually found the wooden shipping crate that refrigerator had come in. We hauled away the crate but not the old fridge.â€

In the Russel Hills subdivision, there is an old barn that people live in. Junk Doctors completed a Cary junk removal job there towards the start of the companyâ€™s time in operation. The family had some old electronics, clothing, and other trash removal needs. Godbold and co. were able to quickly schedule that service in order to get those customers taken care of. Junk Doctors always does their best to accommodate same or next day junk pickups in Cary, NC. Junk Removal in Cary, NC is the lifeblood of Junk Doctors.

Cary also has a lot of swimming pools. Godbold and co can remove swimming pools and hot tubs in addition to their junk removal offerings. Godbold says they can do above or in-ground pools, but the typical homeowner has an in-ground pool. To haul away an in-ground pool, we first must break up all the material that makes up the pool. The course of action for removal depends on whether the pool is made of fiberglass or concrete with a liner. After the pool has been broken up, it will be hauled away. Junk Doctors is equipped for both large junk removal jobs and small junk removal jobs in Cary!

Trash removal in the Cary area can be just that. â€œMost people call us a Cary junk removal service. But that isnâ€™t all we do. That is our main focus. But we can also schedule a two-hour arrival window just to empty your trash cans. It is not an the uncommon occurrence that the garbage company leaves a bin un-dumped. If you absolutely must have it gone, we can come by and empty those cans for you. It doesnâ€™t really matter whatâ€™s in them as long as the stuff isnâ€™t hazardous. 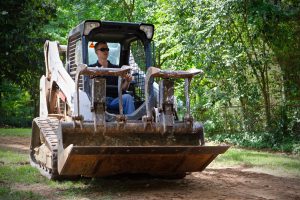 Cary was also the site of Junk Doctorsâ€™ first hoarding job. â€œThat job was crazy because it was the first time we had seen a hoarding job. We do a couple of those every month now, but back then we didnâ€™t know this type of stuff existed. This guy had mounds and mounds of clothes throughout the house that he had never worn. Some of the stuff was almost brand new. The clothing had never been out of the wrapper. We did take the time to make a Dorcas Ministries run and dropped off almost a full truckload of clothes.â€ That should last them a while!

As they got further into the job, Junk Doctors noticed how obvious it was that many of these expensive clothing items had never been worn. Several hundred dollars in cash was found throughout that home as well. â€œWe told the homeowner who hired us about the money, the and he told us to pocket it as a tip. We didnâ€™t argue.â€

Most Cary junk removal jobs are pretty routine. Junk Doctors does junk hauling jobs in Preston, Macgregor, Lochmere, and in the new Western part of Cary. â€œIt amazes me the number of jobs that we do in West Cary – the 27519 zip code part of Cary. Those houses are new enough. But the people who can afford those large homes donâ€™t want to put up with junk around their property, and they call us to get rid of it promptly. We actually get a bunch of work from people who just moved in and have a lot of cardboard – usually moving boxes – that needs to be picked up. It wonâ€™t fit in their car and they donâ€™t want to wait on the garbage men to pick it up. So they call us.â€

One of the hardest junk removal jobs in Cary that Godbold ever did was a rear projection TV. â€œI remember getting this rear projection TV from the third floor of this massive home in Preston. We made it down the first flight of stairs and started down the second with this huge TV. This thing probably weighed around 350 pounds. It was Christian and I. When Christian got to the bottom, I miscounted the steps. I had reached the ground floor but thought I had another step to go. I stepped forward and expected to drop. When I didnâ€™t drop, we almost lost the TV. Luckily, we somehow managed to hand onto the TV. Right beneath our feet was some very nice hardwood flooring. It would have been expensive to fix that!â€

Though Junk Doctors is extremely careful with Cary junk removal jobs, accidents and damage do occasionally happen. One of the worst mistakes the company made was in removing a massive, commercial-sized refrigerator from a nice home in Lochmere. â€œFor some reason, our guys didnâ€™t realize there was a metal bracket dragging along the hardwood floors on the way out. There was a scratch that ran all the way from the kitchen and out the door.â€ Godbold hired Julio Santee with Santee flooring. â€œHe did a great job. I recommend him for all of your flooring needs.â€

â€œItâ€™s been really neat growing this junk removal business in Cary over these last few years.â€ Though Godbold hasnâ€™t worked on a truck in several years now, he still has a close handle on the business. â€œWe donâ€™t put up with any junk from our employees. Junk Doctors hires people with a great personality who are willing to work hard. Our owners want to make sure we take care of all of our Cary junk removal customers.â€ Call us today for Junk Removal in Cary, NC, you can also book online and save $20. 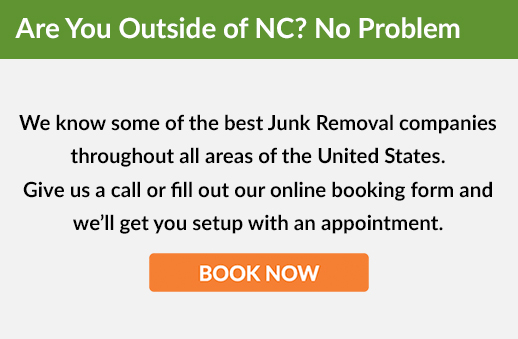